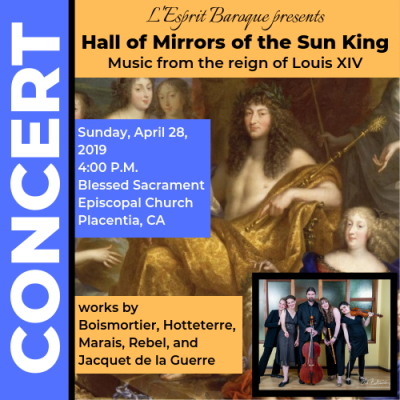 We welcomed the spring season with a taste of Joseph Bodin de Boismortier’s cantata Printemps and brought you to the Hall of Mirrors of the Sun King! L’Isle de Délos by Elisabeth Jacquet de la Guerre depicts the Isle of Delos in Greek mythology, where Apollo rules over his daughters, the nine Muses. This cantata was composed for arts patron extraordinaire King Louis XIV of France, who often represented himself as “the Sun King” or Apollo. Also featured on this program were works by Marais, Rebel, Hotteterre, and more.

Tickets are no longer available for this event.

Joseph Bodin de Boismortier (1689-1755) was born in Thionville, in the Alsace-Lorraine region of northeastern France. He had a long and successful career as a composer, even though he never was granted an appointment to the French court. He was given a royal privilege to publish in 1724, and kept publishing music until his death. He published an opera, Daphnis et Chloe, and a number of cantatas, but is mostly known for his instrumental works. In particular, he was one of the first composers to write sonatas and chamber works for the transverse flute.

His cantata Le Printemps (the Spring) was published as part of a set of four representing the four seasons. It was first published in 1724, the year Boismortier was granted the Royal Privilege to publish music, and was his first foray into writing vocal music. The cantata is scored for soprano, treble instrument (flute or violin) and continuo, and tonight’s performance will divide the obbligato part between the flute and the violin.

Jean-Féry Rebel (1666-1747) was the son of a singer, employed in the French court. He studied violin and composition with Jean-Baptiste Lully, who soon granted him a position in the Opera and in the 24 Violons du Roy. He soon became the concertmaster of both groups, as well as being granted the privilege to compose for the King. He dedicated many of his sonatas to his powerful patrons, including a Tombeau for his teacher Lully, who died tragically of gangrene in 1687. As Rebel grew older, he gave his positions as a court musician to his son François, also a talented violinist. He edited and published his compositions in collections later in life.

His second collection of violin sonatas, published in 1713, was surprisingly forward-looking, resembling more the sonatas of the late Baroque than the dance suites of his contemporaries. They feature four individual movements which are not dances, each a complete idea. Tonight’s program features the second of this set, in G major.

Jacques-Martin Hotteterre (1673-1763) was a notable flute player and composer during the French Baroque era. His family owned a prominent workshop for making woodwind instruments, and his father, uncle, and grandfather had all played flute and oboe for the court of the King. Jacques-Martin followed in their footsteps, but quickly surpassed his ancestors in his reputation as both a performer and composer. He published several books of pieces written for solo flute or two flutes, similar in style to Marais’s Pièces de Viole. These established the transverse flute as a solo instrument as versatile and beautiful as the violin or viola da gamba. In addition he published one of the first treatises on flute playing, Principes de la Flute Traversière, which explores the possibilities of the new three-sectioned transverse flute. Between his books of pieces and his teaching, which produced a number of excellent flautists, Hotteterre is considered to be the founder of the French School of flute playing.

The Troisième Suite in B  Minor is from his Premier Livre de Pièces for solo transverse flute and continuo, published in 1715.

Marin Marais (1656-1728) was a gifted virtuoso on the viola da gamba, and one of the most important composers of the French Baroque era. He studied viola da gamba with Jean de Sainte-Colombe, and by age 19 he was playing with the Opera orchestra in Paris under Jean-Baptiste Lully. He soon started composing, under the tutelage of Lully, and was appointed as a royal chamber musician to Louis XIV. By 1690 he also conducted and composed for the Opera, a post he inherited after the premature death of Lully. As he grew older, he passed his position at court to his son Roland. Marais had a great reputation as a teacher, and many of the next generation of viol players, such as Charles Dollé, Louis de Caix-d’Hervelois, and Jacques Morel are believed to have studied with him.

The D major suite performed tonight is the fifth suite in Book 2 of his Pièces de Viole, a huge collection in five volumes of pieces written for viola da gamba and continuo. Book 2 was published in 1701, near the height of his career. Of particular note in this suite is the character piece, Les voix humaines (human voices). The rhythms and articulations of this movement imitate the natural rhythms and timbres of a speaking voice.

Louis-Antoine Dornel (1680-1756) was known as an organist and composer in Paris. In 1725 he became the Master of Music of the Academie Francaise, and composed one motet a year to be performed both at the Academie and at the Concert Spirituel. Though his works were reviewed favorably in the Mercure de France gazette, some of Dornel’s contemporaries viewed him as a second-rate musician and composer. Most of his works have been lost, but he did publish a few collections of vocal and instrumental works that survive.

Tonight’s program features Suitte 6 from Dornel’s first published collection Livre de Simphonies, a book of trios for two treble instruments and continuo. For these pieces Dornel uses the form of a dance suite, in the French style, featuring a Prelude, an Allemande, a Ritournelle, a Gavotte en Rondeau, a Menuet and a Chaconne.

Elisabeth Jacquet de la Guerre (1665-1729) was born to the Jacquet family, a famous family of musicians. By the age of 5 she was adopted into the household of Madame de Montespan, Louis XIV’s most famous mistress, and sang and played harpsichord for the court until 1684, when she left the court to marry the organist Marin de la Guerre. She was given the Royal Privilege to compose and publish music, a rare honor in France, and was the first French woman to compose operas. She also published three volumes of cantatas, two volumes of keyboard music and a book of trio sonatas. Her works are revolutionary and forward-thinking, combining the Italian styles of her teachers with the tastes of the French high Baroque.

L’Isle de Delos comes from her third book of cantatas, first published in 1715. It depicts the Isle of Delos in Greek mythology, where Apollo rules over his daughters, the nine Muses. This cantata was composed for Louis XIV, who often represented himself as “the Sun King” or Apollo.